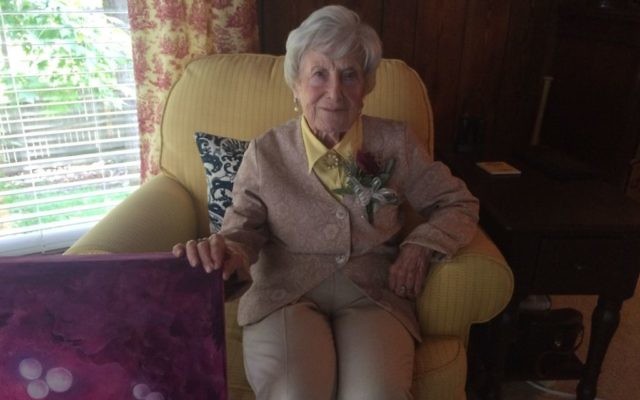 There’s a hypnotic swirl of pastel that could swallow a viewer forever. In an epic wash of acrylic, it seems this woman is a master.

With the use of a beautiful, waving navy color washing into a soft, light purple, she has mixed impressionism, abstraction, surrealism and fantasy into “Fruits of Life,” an odd and beautiful shell design. 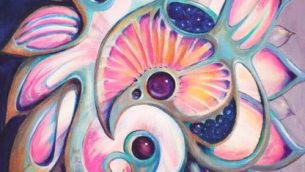 This isn’t her only way to create. Doree Kemler has taken 100 years to master her art. From landscapes to abstracts to sculptures, she has tried her hand at everything.

As a centenarian — Kemler celebrated her 100th birthday Aug. 12 — she has had the time. Her well-practiced hands have learned to use what is available.

From the first time Kemler picked up a pencil, she has been making art. While she tried going to school once to learn to paint from someone else, the teacher shook their head. “Don’t let anyone else teach you,” Kemler recalled the teacher telling her. “You’ve already got it.”

In addition to creating art, which she sells through her website (www.doreeskemler.com), she takes time to teach art to younger seniors. 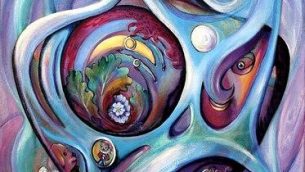 In 100 years, she has focused on more than painting. Kemler filled her work years with social work and psychology, retiring at age 63 and becoming a senior disability analyst. With a wicked grin and a glimmer that only grandmothers have, she informed her birthday party that under her watch, she made certain that only those who needed disability funds received them.

“It was the ’80s,” Kemler said. “People could pay their doctors, and they would write letters. But if we looked at their history, they would have no disability. Then we couldn’t pay people who actually needed money when they could not work.”

When she was not working (and even when she was), art filled her time. Visual designs such as figurines, ceramics and carvings are scattered around the home of one of her sons, Michael Bloomfield, who helped host her 100th birthday party.

He might be her biggest fan. Pointing to each work that he could see and calling out his favorited, Bloomfield showed pride when he read the scrawl of Doree Kemler in the corner of each. 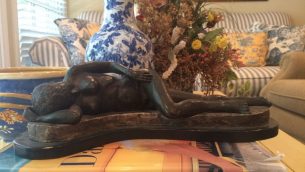 Kemler, who lives in Dallas, moved to the Atlanta area in 1994 to be near her children. People have always called her Doree, which came from a version of Dorothy, spelling currently unknown.

“I haven’t seen my birth certificate since I was a little girl,” Kemler said.

Even as her birthday lunch ended, people still gathered at the table. One pushed her phone over, making sure that everyone could see the painting on it. “Can you believe she painted this? She’s amazing for a hundred-year-old lady.”

Kemler wore a smile with a corsage pinned to her jacket just under a small bundle of pearls while talk turned to her oncoming cake. She was the first to say how good her life has been.

To her, 100 is just another year, and her birthday was just another day, as much as her family was thrilled to celebrate her and her accomplishments.

Published at  the AJT

Thank You for Visiting